Nothing is forever, this too shall pass 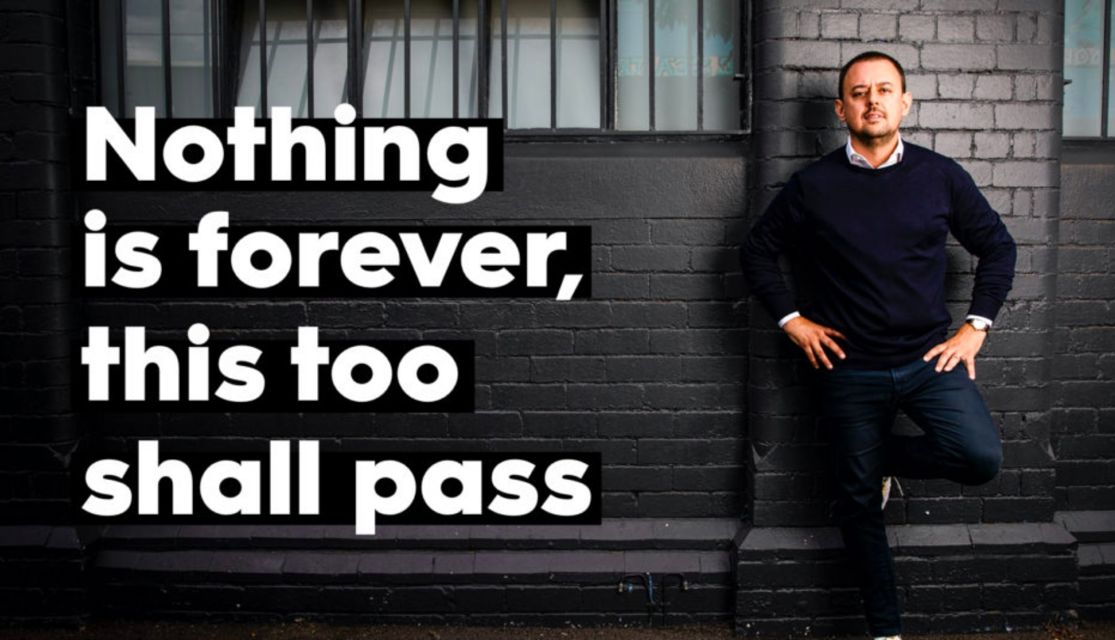 At the start of last year things were very tough for me.

My start-up business was two months into a capital raise and, to be frank, it wasn’t going so great. In business, and in life, we’re meant to have a plan, a direction. They say if we work hard, make sacrifices, and visualize where we want to be, everything will work out.

Except it doesn’t. Things weren’t panning out as neatly as I’d imagined they would. Not even close. The stress I felt was palpable.

I was making the sacrifices – I’d sold my car the previous year to save money – and I was working my arse off, but I no longer felt in control. The nature of building a start-up meant that I was mostly just ‘doing’ and, to be honest, I needed to spend more time thinking.

Ditching the wheels turned out to be a blessing in disguise. Now that I was on foot, my daily commute – a 30 minute walk each way to the office – became my thinking time. I began searching out podcasts that I thought would help validate the founder journey I was on.

Like anyone who has ever ventured into the start-up world or, indeed, anyone who has taken a risk, pushed themselves or tested their limits, I felt like I was in the fight of my life. And there was no way I was going to fail. But the usual self-affirming ‘you-can-do-it’ podcasts weren’t giving me what I needed.

I was after more depth, more grit. I needed wisdom. I needed courage. I needed inspiration. And then I came upon a historical figure who I knew little about, but who had what I was seeking: Winston Leonard Spencer-Churchill.

For the next six months I immersed in the life of the British wartime PM, listening to six biographies, each dissecting his legacy from varying angles and different political persuasions. A much loved and equally maligned individual, I learned enough to fill a tanker full of Pol Roger. I waxed lyrical about the man to anyone who would listen.

The truth is, he steadied me. He steeled my resolve and prepared me to take on whatever I needed to face. And what I needed to face was the mundane daily grind that would, incrementally, get me where I needed to be.

Fast forward fourteen months and, like you, I find myself back in the heart of battle once again. This time, however, a small part of me feels better prepared. If there’s one thing, I can share from my brief dance with Churchill that may provide some solace during these grave times, it’s the following:

“Success is not final; failure is not fatal. It is the courage to continue that counts.”

Trust me, he’s right. Everything is temporary. All we can do is keep moving forward.

In lockdown? Your brand doesn’t need to be

Supporting small business, one sip at a time